To realise the vision of the partnership, we have more closely analysed the patterns related to access to non-communicable disease (NCD) care in two settings – Lebanon and northern Iraq – and are currently implementing and adapting models of care that we developed in Lebanon and Iraq. Both countries are home to a large number of people in need of humanitarian assistance, including more than a million Syrian refugees. Partnering for Change operational partners, the International Committee of the Red Cross and the Danish Red Cross, work with local stakeholders, including national Red Cross and Red Crescent Societies to improve access to prevention, diagnosis and care for people living with NCDs and requiring uninterrupted care to survive and avoid complications.

The Syrian conflict has led to one of the world’s largest refugee and displacement crisis of our time. Eleven years have passed since the Syrian conflict erupted. The ramifications have left an estimated 13.5 million Syrians forcibly displaced, more than half of the country’s population. The vast majority need humanitarian assistance. Many have fled to neighbouring countries, including Lebanon and Iraq, which are trying to balance their populations’ demands and the needs of the many refugees – some of whom depend on NCD care. The operational partners of Partnering for Change are working in Lebanon and Iraq to build capacity and ensure that NCD care is available to all who need it, while Partnering for Change have partnered with the London School of Hygiene and Tropical (LSHTM) medicine to generate evidence to support this work. 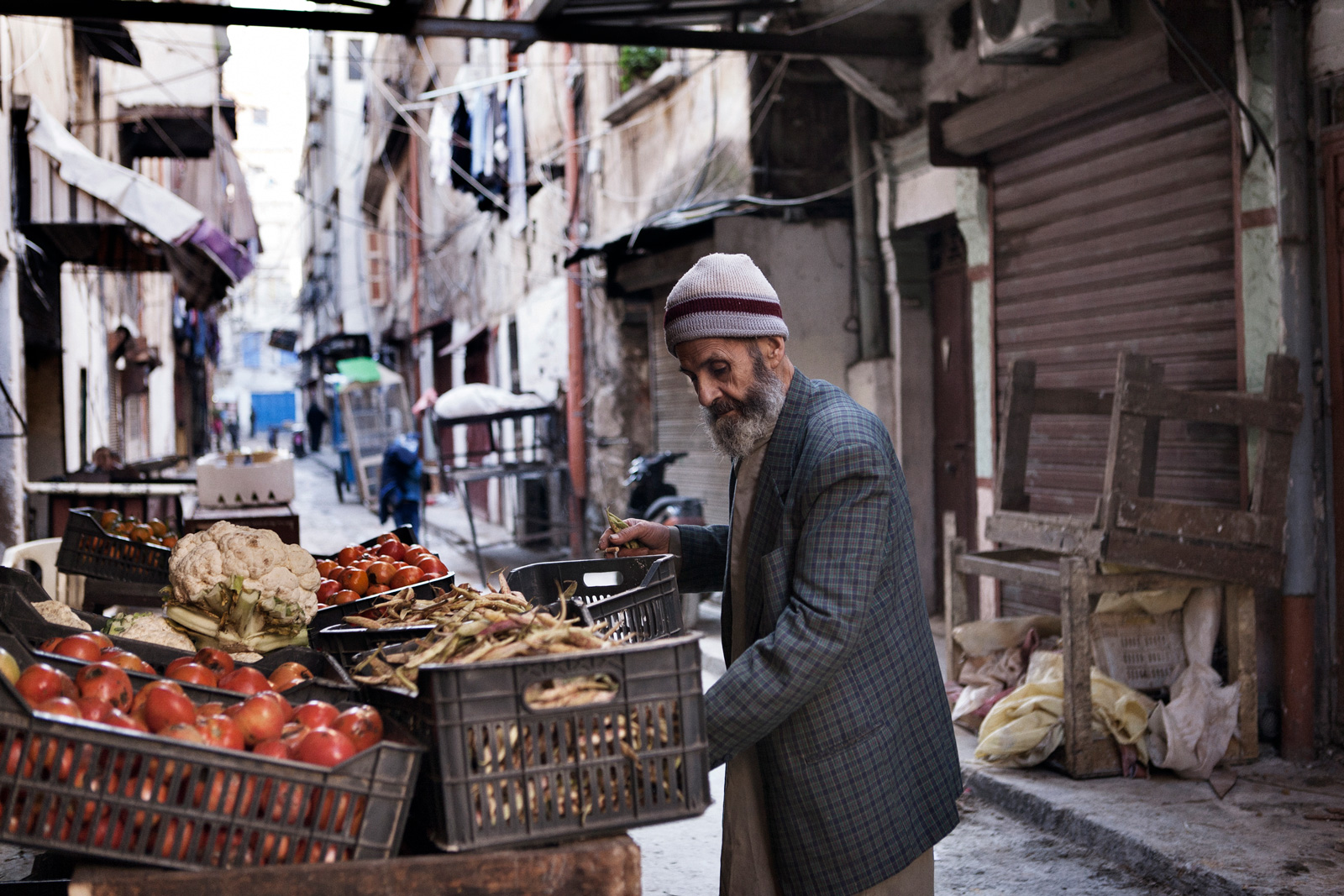 Tripoli, Bab al-Tabbaneh. Destruction and poverty are consequences of recurring conflicts. The market, once overcrowded, is now empty because of the conflict. © ICRC.  SALVINELLI, LAURA 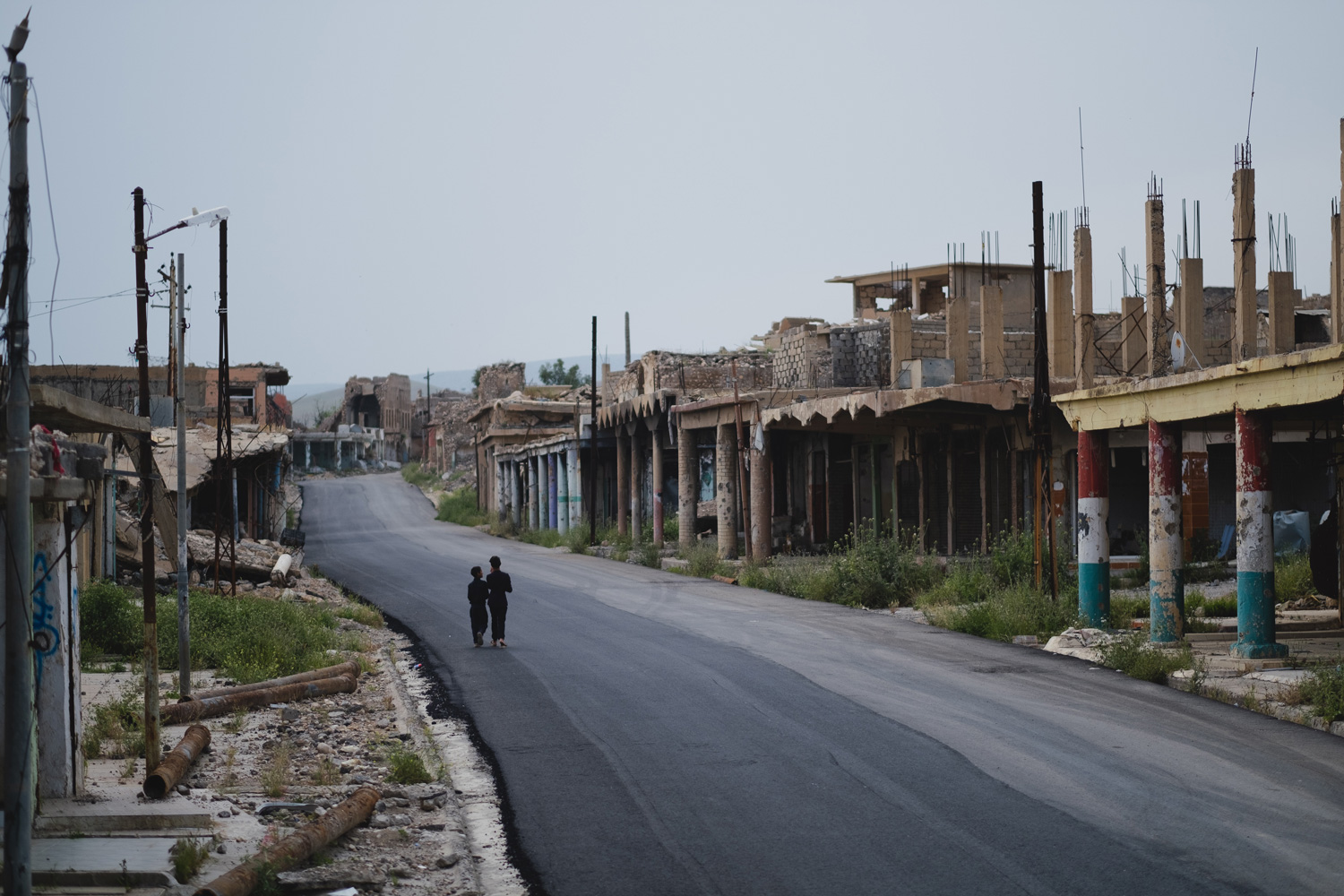 Sinjar, Iraq. Children walking through the ruins of the old marketplaces in Shingal, following the war with the Islamic State.

Peer-support groups for diabetes and hypertension

The Lebanese Red Cross, with the support of the Danish Red Cross, is implementing peer support groups for refugees and vulnerable host populations living with diabetes and/or hypertension. These groups – starting in 2022 – build on insights generated through LSHTM research and consist of a two-phase intervention delivered by social workers and volunteers. The groups are complementing the patients’ routine care by providing a space for continued disease education, experience sharing and mutual support. The research partners at the LSHTM, together with the Danish and Lebanese Red Cross, will evaluate the process and outcomes of the programme.

The International Committee of the Red Cross (ICRC) supports a local NGO-run dispensary (private primary care facility) in northern Lebanon where a large number of Syrian refugees stay and is co-implementing an integrated care delivery approach at this site. NCD management often requires long-term and multidisciplinary care, and the local teams in this facility are integrating care through referrals and joint case management between the primary care, mental health and physical rehabilitation services that are located within the same site. Integrated NCD care is a novel approach in humanitarian settings, and lessons learnt through the implementing process can offer evidence of impact, operational strategies and advocacy points to replicate, or expand the scope and scale of similar programmes. The research partners at the LSHTM, together with the local ICRC team, will evaluate the process and outcomes of the programme.

The first inception meetings in Lebanon were held with local academic partners towards the end of 2018, and the research was initiated the following year with a workshop in Lebanon with the London School of Hygiene and Tropical Medicine in June. The research sought to investigate the gaps in chronic care in the country and the non-communicable disease models of care used.

No sooner had the work begun when the COVID-19 pandemic slowed all efforts. Over and above the global pandemic, the destruction of the Beirut explosion was a devastating blow to the country that led to further setbacks. The work has since continued, and the adapted models of care are now being implemented locally.

1.9 million people (28.8% of the population) are in need of humanitarian assistance

An inception meeting was held in Beirut, where local and HQ representatives of the Danish Red Cross, the International Committee of the Red Cross and Novo Nordisk, as well as researchers from the London School of Hygiene and Tropical Medicine and a team of independent research consultants meet face–to–face for the first time.

A team of local independent academic partners in Lebanon were appointed to work with researchers from the Faculty of Health and Sciences closely collaborates with the London School of Hygiene and Tropical Medicine.

A research protocol was developed, and a situational analysis of non-communicable disease models of care was undertaken to identify access to chronic care gaps in the country.

Improperly stored ammonium nitrate at the Beirut port exploded, causing chaos and destruction in Lebanon’s capital. This disrupted Partnering for Change due to the volatile political and socio-economic situation which flared up in the aftermath of the blast, the injury of the lead researcher in the blast, and diversion of local partners to respond to the blast.

The London School of Hygiene and Tropical Medicine (LSHTM) and the local independent research team organised a workshop to discuss the findings of their Lebanon situational analysis, including key gaps and potential solutions. This informed subsequent workshops to define the adapted models of care for non-communicable disease care in humanitarian settings.

Long-term partnership on NCD care between DRC and WDF

The Danish Red Cross (DRC) and the World Diabetes Foundation (WDF) formed a four-year partnership named “Bridging the Gap” to advance a nationwide response to the high burden of non-communicable diseases among Syrian refugees and vulnerable Lebanese host communities. Findings from Partnering for Change inform the activities. The partnership is funded through a grant of DKK 27.5 million from the Novo Nordisk Foundation.
Q3 2022
Q3 2022

Implementation of adapted models of care at ICRC and DRC sites

After long planning processes and delays, the adapted models of care are in the process of implementation at the relevant Danish Red Cross (DRC) and International Committee of the Red Cross (ICRC) sites. Data are collected to evaluate the effectiveness of the adapted models of care. ICRC is implementing an “integrated NCD care model” involving a multi-discplinary health team, whereas DRC is implementing  a “peer-support group model” as their focus.

The research in Iraq kicked off in the second half of 2020. Similarly to Lebanon, the research focused on gaps in chronic care and non-communicable disease models of care. Reflective of the COVID-19 pandemic circumstances, adaptions were made to the research methodology. The Partnering for Change research findings were also shared with local governmental healthcare decision-makers. The ICRC has since handed over its non-communicable disease related health activities in Dohuk to the District Health authorities.

2.5 million people (6.1% of the population)
are in need of humanitarian assistance

Many of the 1.7 million returnees continue to live in a critical shelter without access to essential services or livelihoods. The resumption of safe and dignified living is not yet feasible.

Hawler Medical University in Baghdad was confirmed as a local academic partner in Iraq. They work closely together with the London School of Hygiene and Tropical Medicine.

A research protocol was developed, and a situational analysis of NCD models of care was started to identify access to chronic care gaps in the country. The study assessment focus and methods were adapted to the COVID-19 context.
June 2021
June 2021

As was planned, the International Committee of the Red Cross handed over the responsibility for its non-communicable disease related activities in Dohuk to the local health authorities.

Workshop for the Iraqi government and Iraqi Red Crescent

The London School of Hygiene and Tropical Medicine organised a workshop for the International Committee of the Red Cross, the Danish Red Cross, the local Directorate of Health and the national Ministry of Health. They shared Partnering for Change study findings and discussed possibilities for integrating decentralisation of care learnings more broadly in Iraq by the national authorities.

The experiences of Syrians with diabetes living in Lebanon

Bouchra is 26 years old and has type 1 diabetes

She is a refugee from Syria and now lives in Lebanon. Here in Lebanon, Bouchra has to pay for her medication, and she cannot afford the prescribed medical tests, which means that she has not always managed to control her blood glucose levels well.

“After my mother died, I worried about taking care of my brothers and sisters. The doctor told me about some medical tests that need to be done, but I do not have enough money to do these medical tests.”

Hassan is 56 years old and has type 2 diabetes

He is a bus driver and travels between Lebanon and Syria. Bouts of dizziness, fatigue, frequent urination and numb hands make Hassan’s job as a driver more difficult.

“If I think or get worried, the diabetes will kill me.”

Ragheida is 57 years old and has type 2 diabetes

Ragheida who is from Syria now lives in Lebanon, Ragheida fears that she will die soon as her body is run down with diabetes-related complications. She needs (but cannot afford) a cardiac catheterisation, has high blood pressure, cataracts and constant eye pain, and struggles to walk on her swollen legs. She recently discovered that she could get a free supply of insulin from a medical centre 20 kilometres from her home; unfortunately, the imported medicines are not always available.

“When the people say that the diabetes is the worst disease in the world, they are telling the truth. The diabetes is a very bad disease, and it hurts my eyes and my heart. I am so sad.”